In spring 2013, a team of art and engineering students led by Professors Brandes (CE), Veshosky (CE & EGRS), Gil and Toia (Art) and farm manager Sarah Edmonds worked collaboratively on a project that would embody the sustainability, art, and engineering interests of Bryan Hendrickson ’10. 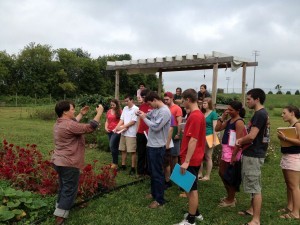 This collaborative project with LaFarm has three components: (1) design and installation of a water storage tank and surrounding sculpture made of found materials (multidisciplinary independent study project with a team of Art and CE students), (2) design and construction of an irrigation system using a well, solar pump, and the storage tank (CE 421 project), and (3) improvements to the nearby drainage swale to reduce flooding of the bottom corner of the garden and increase retention and infiltration of runoff (CE 421 project).  Generous funding to support this project was provided by Art Hendrickson ’51 in memory of his grandson, Bryan C. Hendrickson, CE class of 2010.

After some discussion, the team decided that a solar well pump system was preferred to a mechanical windmill, due to more reliable and consistent operation during the hot summer months when water is most needed. The artistic component of the project was a sculpture built from found materials that surrounds the water tank. The tank was located on a rise above the garden near the weather station. The sculpture was dedicated at a ceremony with the Hendrickson family and President Byerly in September 2013.

Meanwhile with additional support of the CE department and the EGRS program, a well was drilled near the tank in May 2013; however, this well was dry to 300 ft and had to be abandoned. Another 150 ft well was drilled in June at the southwest corner of the garden, this time successfully, with water at ~65 ft. A Grundfos solar pump system was purchased, including pump, solar panels, control unit, tank level switch, and all necessary wiring and piping. 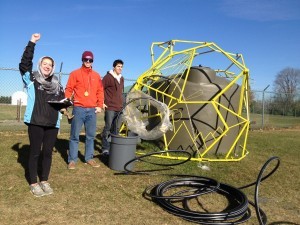 The fall 2013 CE 421 Hydrology class worked with Professor Brandes on the design, configuration, and full-scale testing of the system. Due to problems with repeated well collapse due to fractured carbonate bedrock at a depth of ~75 ft, the steel casing was extended to 100 ft and an inner slotted 4-inch PVC casing had to be added to the well. The system was fully tested at the end of the fall semester and was found to deliver ~11 gpm to the tank.

Final installation of the system was completed in late spring 2014, with the help of the Engineering Machine Shops, Plant Operations and students in CE 351 Water Resources Engineering. The system was used throughout summer 2014 by Sarah Edmonds and the student farm workers.

Photos and information about this project were provided by David Brandes, Professor of Civil and Environmental Engineering.