To conclude Earth Month, the Office of Sustainability hosted Earth Fest, a celebration of the intersectional role that sustainability plays on Lafayette’s campus. Earth Fest consisted of various organizations and clubs providing sustainable activities that relate to their mission, a clothing swap, and lots of food including local & vegan snacks, smoothies from LEAP’s smoothie bike, and kombucha. Some of the groups that participated at the event were Food Recovery, a club that is devoted to decreasing food waste on campus, Alpha Phi Omega, Lafayette’s service fraternity, and Kaleidoscope, an organization that focuses on social justice issues.

The clothing swap was one of the biggest successes of Earth Fest. Clothing swaps provide an equal opportunity outlet for everyone to reduce waste while still getting “new” clothes. Over 200 lbs. of clothing were collected before and during the event and there were lots of great finds. The event was such a hit that the Office of Sustainability ended up with receiving more clothes than people took, all of which will be donated to Refugee Action, Career Services, and American Family Services. Many students expressed interest in having events like this multiple times throughout the year or even having a permanent thrift shop on campus. 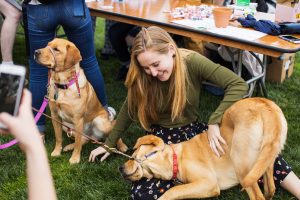 These sentiments are expressed by senior Lara Henderson in saying: “It was amazing to see how willing students were to donate to the clothing swap. It seemed like our clothing supply never dwindled because after students came by and took a few items, they returned later with a few of their own to donate! It gives me hope that a thrift or donation only clothing swap could become a permanent thing at Lafayette, which I think would be a great idea to support a more circular economy and sustainable fashion network.”