Michael Mann, professor of Atmospheric Science at The Pennsylvania State University and director of the Penn State Earth System Science Center, will talk about the threat of human-induced climate change 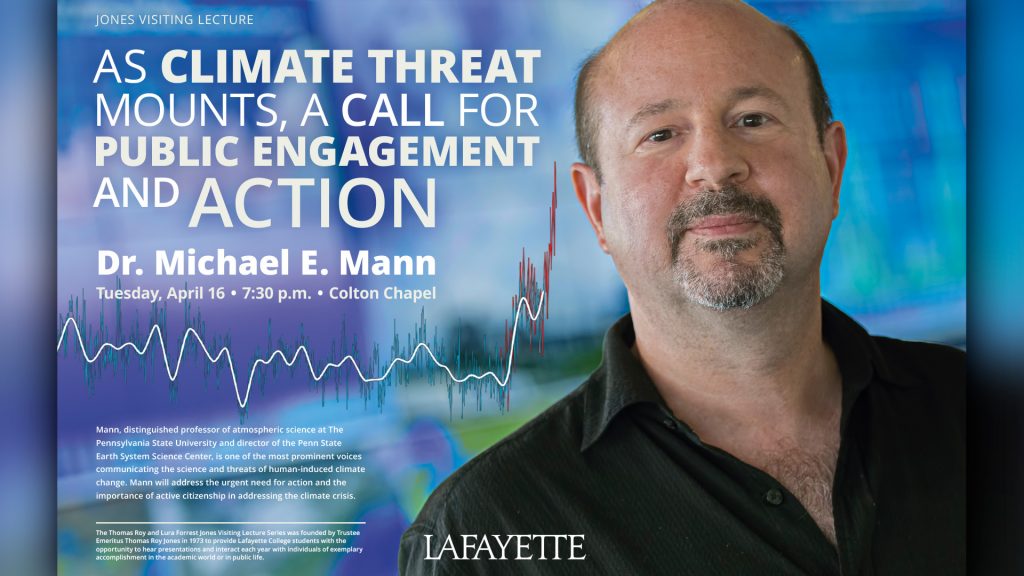 Climate scientist Michael Mann, professor of Atmospheric Science at The Pennsylvania State University and director of the Penn State Earth System Science Center, will speak at Lafayette College about the threat of human-induced climate change, the challenges to climate action in the current political landscape, and the importance of active citizenship in addressing the climate crisis.

Mann will deliver his talk, “As Climate Threat Mounts, a Call for Public Engagement and Action,” at Colton Chapel at 7:30 p.m. on Tuesday, April 16.

Mann is a world-renowned climate scientist with expertise in climate modeling and human-induced climate change. He has received numerous honors and awards for his work; most recently he was awarded the Tyler Prize for Environmental Achievement (2019), the Award for Public Engagement with Science from the American Association for the Advancement of Science (2018), and the Climate Communication Prize from the American Geophysical Union (2018). Mann is the author of more than 200 peer-reviewed and edited publications, numerous op-eds, and four books. He is also co-founder of the award-winning science website RealClimate.org.

“Climate change is a defining issue of our time, posing a very serious and deepening threat to human societies,” says Kira Lawrence, John H. Markle Professor and Chair of the College’s Geology and Environmental Geosciences Department. “Dr. Mann is a prominent and well-respected expert in climate science. His visit presents a unique opportunity for our community to understand the pressing need for action to confront the challenges of climate change.”

Mann’s talk at Lafayette is a demonstration the College’s commitment to environmental stewardship and promoting an ethos of sustainability on campus and in the community. In February, the College’s board of trustees unanimously voted to approve a Climate Action Plan, which charts the path for the College to achieve carbon neutrality by 2035.